Going into this game after a solid performance, our first win of the season at Anfield and wanting to build on our unbeaten start to the season, there was a lot of positivity surrounding the team and among the fans. But despite being newly promoted, Southampton were never going to be an easy team to beat – especially after the trouble they caused both the Manchester clubs. Our starting line up saw a few changes from the game at Anfield – Szczesny finding his way back into the starting line up, replacing Mannone, who to be fair, didn’t do much wrong in his two games between the sticks. Coquelin replaced injured Diaby in midfield and Gervinho got the boss’ nod over Giroud. It looked like we were playing without a conventional striker on Saturday, with Gervinho playing the role of a “false number 9”, which worked out pretty well. 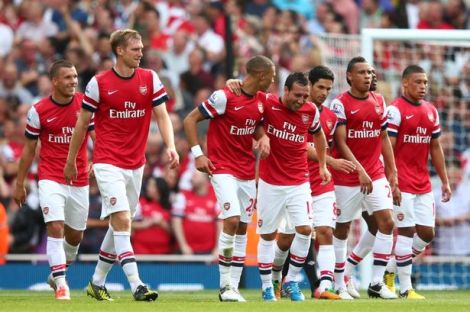 Our first goal came in the form of an own goal with the ball going in off Jos Hooiveld as he was facing his goal when Gibbs shot was parried into his path by Kelvin Davies. This was followed by a brilliant 25-yard curling free-kick from Lukas Podolski, a good near post finish by Gervinho and another unfortunate own goal from Nathaniel Clyne. Szczesny dropped the ball into the path of Danny Fox which gave the visitors a goal in the dying minutes of the first half – something I would assume Steve Bould wouldn’t have been too happy about. Southampton looked a lot better in the second half, but that didn’t stop us scoring with Gervinho getting his second of the game and Walcott coming off the bench to make it a 6-1 drubbing. Overall, a great performance and Gervinho’s two goals should do him a world of good.

Southampton looked really poor in the beginning of the game, and thankfully we capitalised on that. We also did have several more scoring chances in the form of Gervinho and a header by Mertesacker. As the game went on, Cazorla and Podolski were combining very well, stringing passes together which enabled the team to play some beautiful direct passing football. Southampton were getting a bit frustrated by this and the third and fourth goal didn’t help this cause. Southampton looked the better team in the beginning of the second half and we managed to find the net again only in the 71st and 88th minute after bringing on Ramsey, Giroud and Walcott.

A lot of players had great games on Saturday – Gibbs, who made 3 key passes, 3 successful tackles and 2 interceptions. Gervinho, our man of the match with 2 goals, Podolski who made 3 key passes with a 100% pass accuracy aside from his great free kick. Vermaelen was also solid in the back and the usual suspects Cazorla and Arteta making 9 key passes today and the latter also making 6 tackles. Podolski and Cazorla are looking better and better with each passing day. Jenkinson also had a good game and I know I’ve said this before but I personally feel Jenkinson needs to improve his positioning a bit. Otherwise, he’s a great player – especially given his age.

Arsene Wenger said in the post-match interview that there was a positive energy in the team:

Especially in the first 45 minutes we had a high level. We had a good combination of pace, speed in our passing, quick combinations, and the movement was excellent. We were a bit lucky as well because they conceded two own goals, but overall I think it was a level of continuity with what we have shown at Liverpool and today. The game was very interesting to watch. In the second half we lost a bit of urgency, that is human, but we controlled the game and remained serious.

There were a lot of positives from the game. One surprising aspect was the fact that we had only 50% possession. That’s low by our standards, especially for a game that we won 6-1. But this is good, since it shows that we are creating a high number of chances for the amount of possession we keep. We had 9 shots on target compared to Southampton’s 3. Our chances in the game were made by both individual brilliance, and by team play with good finishing – something that we have clearly worked on. Arteta and Coquelin won the ball and they, along with Cazorla, played quite a few juicy through balls to the strikers.

At the end of the day it was a well deserved three points. And with 8 points after 4 games with a goal difference of +7, we’re currently third in the league, below only Chelsea and United. Things are looking very encouraging at the moment but this week will be a real test as we will see the team line up against Montpellier and Manchester City this week. I’d also like to point out that our 49 game unbeaten run in 2003-04 began with a 6-1 thrashing of Southampton at home. A sign of things to come? Only time will tell.

Until then: Up the Arsenal!