The game against Southampton was no doubt an enjoyable spectacle. Arsenal’s exciting play provided fans with many candidates for Man of the Match. So we at Chapman’s Goal asked our followers who, in their opinion, deserved the coveted, and metaphorical, Champagne. And in 3rd place, is…

11% of you voted for our new star and it’s fully deserved. Santi was in dazzling form for the Gunners, captivating the eyes of those watching with superb touch, skill, awareness and vision. He had 92 (!) touches on the ball and a 89% pass accuracy.

The new boy has settled in well so far. Let’s hope it continues.

The Ivorian produced a stellar performance, scoring 2 goals and playing a part in almost every Arsenal attack. He was a real live wire displaying impressive movement, improved composure, a new found confidence and sublime link-up play with his fellow forwards, and like Cazorla his pass accuracy percentage was high (88%). He received 37% of the votes. Well deserved.

That brings us to the winner. The [metaphorical] award goes to… 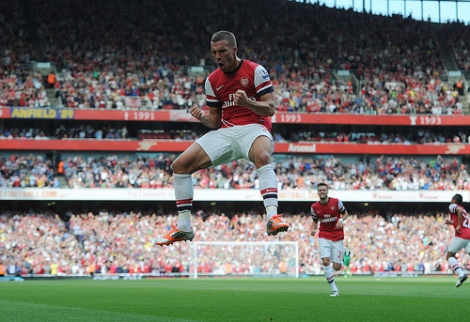 Who else? 40% of you voted for the German, helping him just beat Gervinho. His impressive performance was rounded off with a fantastic free-kick, making it 2 goals in the Arsenal colours for the new signing. He played with style, determination, guile, power and class. He has settled in well and the attributes he possesses have seen him become a key part in Arsenal’s attack, just 4 games into his career here. Lukas Completed 100% of his passes (31) and had a total of 46 touches, 2 shots and 4 dribbles. Impressive.

I’m sure he’ll sleep well tonight safe in the knowledge of this.

What the Fans say –

We also asked our followers to assess Lukas’ performance. Below are some of their answers.

@Gooners247: ‘Flawless. Good to see a player who has the work rate to match his technical ability and footballing brain.’

@EducatedGooner: ‘A player who displayed hunger for success at his peak with non-stop hard work, thought and flamboyant ability.’

@zefa22: ‘His free kick showed he has acute sense of direction, power and finesse.’

@Cliffordinho: ‘Great skill, vision and ability to pull that out. Link-up with Santi was amazing too’

@hahostolze: ‘A bulldozing performance of sheer determination, class and energy. A left foot like no other and a great team player.’

@ZazooShah: ‘A player who defines the word ‘quality’: Reliable, adaptable, powerful and effective, more than a replacement; a leader’

I think that sums it up.