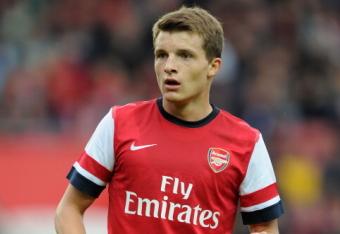 A name many Gunners may have came across in recent times is Thomas Eisfeld. He took part in Arsenal’s pre-season tour of Asia, netting one past Malaysia XI in a narrow 2-1 win, and another in the 2-2 draw with Kitchee FC and most recently scoring against Bolton for the under-21 side. Not bad then for a player who has hasn’t experienced much first team action in his career so far. But who is he, and what should we expect from him?

Eisfeld moved to Arsenal from German side Borussia Dortmund for a fee of around £420,000 in the winter transfer window of the 2011/2012 season. Wenger said that “he has the attitude and technical ability to be a valuable addition to our squad” and with six goals and six assists in just twelve appearances for Dortmund’s under-19 side, it’s easy to see why he caught Wenger’s eye. He also captained the German national under-15s side. Pretty impressive, don’t you think? You may ask then, with such great qualities why didn’t Eisfeld feature in the Dortmund first team? By that age other Dortmund youngsters such as Mario Gotze were already first team regulars. The reason is a serious injury he suffered which slowed his footballing career down.

The injury to Thomas came in late 2009, when he suffered major damage to the anterior cruciate ligament, one of four major ligaments in your knee. This injury slowed down his bright career but Thomas was determined not to let that stop him from becoming the great player that many people know that he can become. This show of determination may be one of the reasons Arsene Wenger believes the German youngster has great potential and a place in a future Arsenal starting eleven.

But what can we really expect in the future from this bright talent? I think it would be over optimistic to expect him to be as good as Mario Gotze but there’s no reason why Thomas Eisfeld cannot develop into a world class player. It may be too early to predict Eisfeld’s future as he has had very little first team experience and needs time before he can play in the premier league. One thing Eisfeld shows is that he definitely has the talent and ability to become a great player one day. This may have been due to being part of the Borussia Dortmund youth academy for seven years, which is one of the best footballing facilities in German, and world football.

“He is young but has proven to us that he can play, that he has the attitude and technical ability to be a valuable addition to our squad. We’re very pleased to welcome him to the Club and look forward to his contribution in the coming seasons.” Arsene Wenger

For a price of under £500,000 i think that Arsenal have a great addition to the club and i have no doubt that one day he will be playing first team football for a well known club. Patience will be needed with Eisfeld as he may be behind other players of his age due to his past injuries. If he’s given the right opportunities, which I’m sure he will being at a great club such as Arsenal, he will develop over time and will be ready for Arsene Wenger’s first team but before that he will most likely play a lot in Arsenal’s reserve side, gaining lots of experience and improving all the time.